wo men have been arrested on suspicion of arson after a fire broke out in Norfolk[1]. Emergency services[2] were called to Bawsey Country Park, near King's Lynn, on Sunday at about 11.40am after a disposable barbecue was "thrown" into woodland causing a small fire, police said. Norfolk Constabulary[3] said two men, both 44 and from Boston[4] in Lincolnshire[5], had been arrested on suspicion of arson and criminal damage and taken to King's Lynn for questioning.

The arrests come as firefighters across England have been tackling blazes during one of the hottest weekends of the year so far.

Wildfires have broken out across the UK after several days of scorching temperatures have left the ground dry. Crews have urged people to be responsible, to clear any rubbish and only barbecue in designated areas. Northamptonshire Fire and Rescue said crews tackled a fire in Spinney Hill, Braunston, on Sunday, which was caused by a disposable barbecue.

It added that it dealt with "a number of incidents", including a field fire in Northfield Road, Cransley, which was tackled by eight fire engines. Humberside Fire & Rescue said they tackled a "large field fire" near St Andrews Quay in Hull. They said: "Motorists are advised to proceed with caution and local residents to keep windows and doors closed due to the large volume of smoke in the area."

Beach-goers also spotted smoke pouring from the cliffs near Newgale Beach, in Pembrokeshire. One witness told the PA news agency: "The beach is still fully open with lifeguards in place. It looks like the fire is just on the cliffs and has been going for a while."

Meanwhile two wildfires broke out in Devon, with firefighters tackling flames in Mary Tavy and Mullacott Cross, near Ilfracombe. 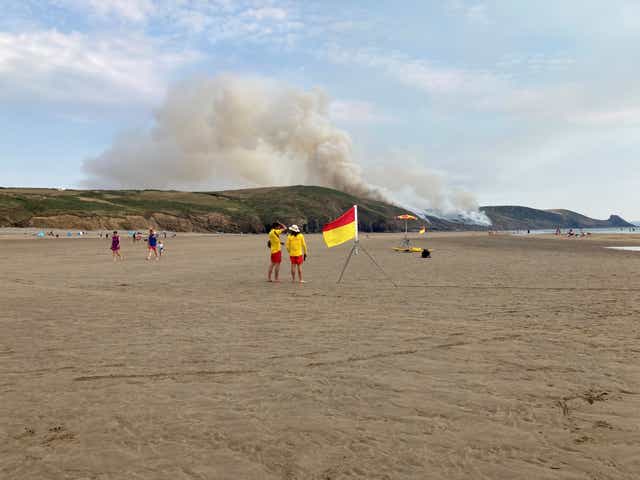 They said an area of gorse measuring 50 metres by 50 metres was smouldering about half a mile from the road. Fire crews damped down the area using off road vehicles and a hose reel jet. It added that three crews were sent to Gibbet Hill near Mary Tavy after smoke began to emerge from "very small pockets" of hot spots burning from a previous heathland fire.

Both incidents were over by about 5.30pm. In Essex, crews were called to Hilly Fields park in Colchester shortly after midday, after 200 metres of grass caught alight and spread to hedges and eight gardens. They extinguished the fire at 12.50pm.

The cause of the fire is unknown.